A short interview with Peter Fuss regarding his exhibition “Achtung!” 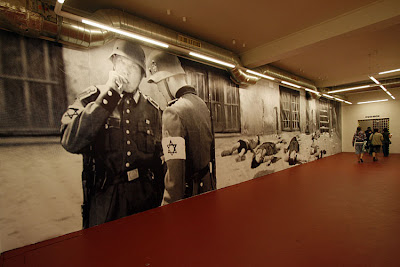 The first solo exhibition of Peter Fuss in Prague’s Nod Gallery had lasted only for 30 minutes. It was devastated and closed. Below a brief conversation with Peter Fuss about this situation.


What “Achtung!” exhibition is all about?

A historical experience is often a source of stereotype way of thinking about what is going on around us in contemporary times. The meaning we adjust to symbols is deeply set in our historical memory. The awareness of the past, the memory of the past has direct impact on our perception of the reality. The memory of World War II, of Holocaust, of unbelievable tragedy of Israeli nation makes that in most places of the world a world “Jew” is associated with a world “victim”. Also a Star of David, except for the obvious association to national and religious symbology, makes one recall a picture of Holocaust. The Star of David has become a symbol of a victim, pain and harassement. We do not want to realise that there are places in the world, where the Star of David brings entirely different story behind itself; that there are places, where the Star of David equals swastika.
To the large extent it is the historical memory of the tragedy of the jewish nation, and a historical association “Jew - victim” that makes it difficult for us to accept the fact that the Jews in Israel since years are using a racist politics of segregation and discrimination. That those are Jews themselves that are separating Palestinians in ghettos and enclaves and surround them with the wall, ruin their homes, forbid to move around freely.
The last offense of Israeli army in the zone of Gaza has been lasting for 3 weeks and resulted in over 1400 victims of Palestinian nationality, 430 children and 100 women included. On Israeli side there were 19 victims, among them 4 soliders killed with own blades. During this offense Israeli army has multiple times abused international rights, has not allowed to evacuate wounded civils and has not allowed to bring help to those in need, as a result of which a lot of them died.
It is difficult to understand or accept the fact that the Jewish nation that was so severely experienced by Nazis, today uses similar methodes. And a slogan of fighting the terrorism cannot be used as an excuse for a usage of those methods.


Aren’t you afraid, that those people who survived and were directly touched by the tragedy may feel offended and hurt by the usage of the archive pictures and placement of the Star of David in the context you are putting it?

Those are not archive pictures. As a base of my work I used pictures of “Schindler’s list” by Spielberg and “The Pianist” by Polanski.
More important from that question who would feel hurt by the exposure of David’s Star in that way, is a question how is it possible that people, who remember statements “Nur für Deutsche” today not only accept, but also allowed for roads that may be accessed by Israeli only. How can people who remember the walls of ghetto, behind which jews were closed today allow and accept surrounding Palestinians with walls? How can people whose relatives were murdered just because of having been Jewish, today justify murders of women and children just because they were born Palestinians? How can people who experienced where nationalism and racism may lead to, today in democratic elections vote for the worst racist parties like Israel Our Home, who gets 15 mandates in Knesset, and its leader becomes the minister of foreign affairs?


Aren’t you afraid of an accusation that you are an antisemite?

I am an opponent of antisemitism. I do not accept the attacks at Israeli nation. It has been multiple times already that I have condemned manifestations of antisemitism and I have stood up against them. That does not mean, however, that I will accept and remain silent about acts of segregation that Jews are performing. I loathe antisemitism as much as any other manifestation of racism. Far too often, in a public debate, under the disguise of antisemite fight, there is actually a suppressed criticism of Jewish politics. Former Israeli president, Mosze Kacaw, has been accused of rape and sexual harassment. Is the criticism of his deeds also a basis for the antisemite accusations?


How would you comment on what happened during the opening of the exhibition?

I have arrived to free country, a country that has reputation of most tolerant and opened to diversity of opinions out of all ex-communist block countries. I have visited the country, where in a public debate one can freely express opinions on topics that are taboo in other countries, topics like: right to abortion, attitude towards Christian religion, politics or own national characteristics. My exhibition has revealed where the border of freedom of speech and right to criticize actually is. It is sad.
The behaviour of Jewish society representatives during the exhibition was itsbitter punchline. Those people have proved with their behaviour, that there are Jews, who not only use Nazi methods in Gaza Zone, Israel, on the line of fire, but also here, in a free European country. Nazists used to divide art into the one they accept and the other, the one they consider degenerated and that has no right to exist. People from Prague’s Jewish commune did exactly the same. And they did it in a way that would make Nazi raiding parties proud. Jews that appeared at the gallery were full of hate and aggression. They destroyed the works, they threatened that they would put the gallery on fire, they were pulling people that came to see the exhibition, they set a dog at them. Nazi during occupation of Poland used to call Polish people „polnische schweine”, the same epithets you could hear from aggressive men in skull-caps.
When the Bulgarians felt offended by “Entropia”, the work of David Cerny that was shown in Brussels, they did not come and destroy that work, they were not violent towards people who were watching it. The only protested, so the part of the work regarding Bulgaria was covered. That is the way to solve problems in civilized world. Not by screaming, not by being aggressive towards anyone who represents a different view.


What happened to the works you presented during the exhibition?

They have been destroyed. And those works that they did not managed to destroy at once, they took with them. It turned out, something I did not know in advance, that the old building where Nod gallery and cult Roxy club are, are actually rented from Jewish commune. They came to the conclusion that if they own the building they can also destroy and take away with them works presented at the exhibition. I think that relevant Czech authorities should react and gain back stolen pieces of art, they should also make those people compensate material loss. If that does not happen, I would not be surprise that in the future, tourists that will sit in Prague’s cafes own by Jews will not be allowed to discuss freely matters, that Jews do not accept. And the tourists who arrive to Prague by cars are risking the loss of its property, just because they have the „PEACE. NO WAR. FREE PALESTINA” stickers on their cars.